Today is Rare Disease Day.  Noah has the rare disease of Congenital Central Hypoventilation Syndrome (CCHS).  A rare disease is defined as "any disease or condition that affects less than 200,000 persons in the US or about 1 in 1,500 people"  (Rare Disease Act of 2002).  Rare diseases can be difficult to diagnose and because so few people have the disease, research for a cure is not widely available.  Approximately 50% of people affected by rare diseases are children.  30% of children with rare diseases will not live to see their 5th birthday.  Rare diseases are responsible for 35% of deaths in the first year of life.  According to the Kakkis EveryLife Foundation, 95% of rare diseases have not one single FDA approved drug treatment.  Approximately 50% of rare diseases do not have a disease specific foundation  supporting  or researching their rare disease. (From globalgenes.org).

CCHS is NOT a lung disease.  Noah's lungs are perfectly normal, even though he must use a ventilator while sleeping or sick.  CCHS is a disease of the autonomic nervous system.  In addition to problems with breathing, CCHS patients can also have problems with regulating heart rate and blood pressure, have abnormalities in the nerves that control the digestive tract (Hirshprungs Disease), have an increased risk of developing tumors of the nervous system (neuroblastomas), have eye abnormalities (decreased response of the pupils to light), decreased perception of pain, low body temperature and sometimes profuse sweating.  They can also have learning difficulties and other neurological problems.  Currently, there are only approximately 1,000 people worldwide with CCHS.  More than 90% of cases occur from new mutations of the PHOX2B gene and there is no history of the disorder in the family.

In Noah's case, he has a mild mutation of 20/25.  We have not noticed any issues with his heart rate and blood pressure as of yet.  He gets an annual holtor monitor to check for heart pauses.  He does have some eye issues and had to have his eye patched when he was younger.  I have also seen his decreased perception to pain.  We call him our tough guy because he rarely cries when he gets hurt.  He does have issues with being hot most of the time, especially in the summer.  We also have to be careful in the winter because he can get cold very quickly.  As for learning difficulties, we have not noticed any as of yet except for his speech, which I think has to do with being in the hospital for 4 months and having a trach at an early age.

It is amazing to think how one small change in one gene can create such widespread issues throughout the whole body.  This is a lifelong condition for Noah.  He will never outgrow it and will never get worse, but also will never get better unless there is a cure.  We have to be vigilant every day of his health and make sure he is well ventilated to prevent serious complications.

My hope for him is that there is a cure.  My goal is to help raise awareness of CCHS in the hopes that it will become recognized by the medical community and that more research is done to help find a cure.  I am so thankful for our small, but close knit CCHS family and our CCHS Network.  We have never met face to face and some of us are in different countries but together we have our amazing children who fight a battle every day.  We can learn so much from them and from each other.

Please take a moment to think of those of us who are faced with rare diseases every day.  Help us spread the word and find a cure. 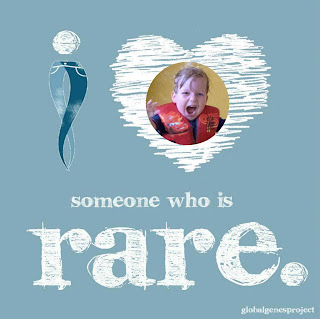 (Special thanks to Jo Cramer Isley, a special mommy to our CCHS friend Lacy)