I have always been a planner.  I like everything to be in order and am not very spontaneous.  This was true with the planning of Noah's birth.  I had everything ready.  His room was painted, crib was ready with new sheets and his mobile hung, little boy baby clothes were hanging in the closet, the car seat was installed and ready for him to come home.  Little did I know that none of that mattered.  He would not sleep in his room (it is too small and will not hold all the equipment), he would not sleep in his crib for 4 months, he would outgrow those little baby clothes in the closet because he spent the first 4 months of his life in a diaper with tubes and wires poking out) and the car seat sat unused in the car for 4 months.  My plans did not include a NICU stay.

I had never given the NICU much thought before I had Noah.  The NICU was just that place in the hospital where they took sick babies.  (Other people's sick babies, but not my baby). I remember my first visit to the NICU.  Chris wheeled me in a wheel chair.  We had to be buzzed in the locked door.  Upon entering, we stopped at the sink and washed our hands.   There were 2 big rooms divided by a nurses station.  Noah was on the right.  Chris wheeled me into a huge room.  There were incubators spaced all along the walls.  Monitors were everywhere.  The antiseptic smell was strong.  Surprisingly the NICU was very quiet.  The only sounds were the various beeping of machines.  Being a nursery, I thought it would be loud with the sounds of babies crying but there were no cries.  I realized that these babies were using all of their energy trying to stay alive.  The room was dimly lit, except for one bright spot where a baby was under several huge biliruben lights.  The blue lights gave the NICU a very eerie glow.  All of the babies, mine included, looked like little aliens undergoing some weird science experiment. You could barely see the babies because they were covered in wires, tapes and tubing.

As Chris wheeled me to Noah's incubator I was terrified but elated to see him.  He was sound asleep.  Wearing only a diaper, wires were on his chest and he had a nasal cannula.  Other than that, he looked perfect.  I was allowed to hold and snuggle him while he slept.  Several times, his oxygen levels dropped to the upper 80s but then came right back up to the 90s.  Before the nurse could even come over to check, the machine had stopped beeping.  After visiting for awhile, Chris wheeled me back to my room.  I was very sad to leave Noah but I thought that this would only be for a short time.  Unbeknowest to me, this was the beginning of our long 4 month nightmare.

We continued visiting Noah at all hours of the day and night.  The day finally arrived when the doctors informed me that I was being discharged but my baby would not be coming home with me.  I was devastated.  This was not in my plans. All of the "normal" things you do in a hospital with a newborn didn't happen.  We didn't get to have the first baby picture, see him in the nursery, or even listen to the speech on breast feeding from the lactation consultant.  We were suppose to be putting him in his coming home outfit and bringing him home to see his sisters and grandparents.  Instead, I was given my discharge papers and we began the long walk to the NICU to visit.  The nurses there were so kind.  They knew that I did not want to leave my baby.  I was assured that they would call if they needed me and they gave me a number to call 24/7 so that I could check on Noah.  We gave him one last kiss and walked out of the hospital without him.  It was the hardest thing I have ever had to do.  We returned home to an empty house. The girls were at school and there was no need for the grandparents to be there.  The silence was overwhelming.  Instead of being home holding my son, rocking him, feeding him, changing him and taking care of him, I was sitting at home with just my husband and I in a silent house.  My parents came over later that morning for a visit and to check on me.  They arrived with sad eyes and hushed voices.  The girls returned home from school glad to see me but missing Noah.  They had only been able to see him for 5 short minutes before he was rushed to the NICU.  Instead of cuddling him, they had to be content with looking at pictures we had taken of him in his incubator.  The silence of the house was deafening.  Instead of a baby crying, phone ringing, doorbell ringing and visitors we were left with nothing.

We began a routine that would continue for 4 long months.  We would wake up in the morning and I would get the girls off to school while Chris would go to work.  I would then get ready and go to the hospital (before the doctors released me to drive, I would have to rely on my daddy to come pick me up and take me to the hospital.  We did this for about a week until I was cleared to drive.  He would pick me up, drive me to the hospital and sit in the lobby while I visited with Noah). Chris would leave work on his lunch break and we would spend an hour together with Noah.   He would leave to go back to work and I would stay until it was time to go meet the girls who rode the bus to school.  Once home, I would begin dinner while the girls did homework.  Chris would come home, we would have dinner and then begin the nighttime routine of baths and getting ready for bed.  Chris would then kiss the girls goodnight and go to the hospital while I tucked the girls in bed.  The next day would begin the routine all over again.  Every weekend, we would either drop the girls at my parent's house or my parents would come to ours while Chris and I went to the hospital. It was exhausting.

Many sights and sounds of the NICU are emblazoned on my brain forever.  The smell of hand sanitizer will forever remind me of Noah's hospital stay.   The silence of a room full of babies was deafening.  Constant beeps and soft whispers of the nurses were all sounds of the NICU.  I saw things I never wish to see again.  Small, sweet babies with tubes and wires coming out of their bodies, mommies and daddies crying by their baby's bedside, the pity and sympathy in the nurses eyes, all made a huge impact on me.  I will never forget the sight of Noah, lying in the NICU, newly intubated, blood on the sheets and him not moving. The sight of the IV in his head was unnerving.  Seeing him lying there with tubes, wires and IVs was frightening.  I wondered what I had done to cause this.  I wondered if he would ever come home.  I wondered if he did come home, how on earth was I suppose to care for him and what kind of quality of life would he have with a trach and vent.   Honestly, at one point I even wondered if we should let him go.  Eventually, we were allowed to hold him.  Sitting in the chair with him in my arms, feeling the hard vent tubing, carefully moving around the wires so as not to pull them out I realized that I would do anything in my power to keep him with us.  I instinctively knew that he had so much to teach us and his life was just as precious as any other. 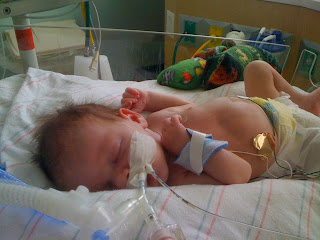 The NICU nurses were wonderful.  When Noah was three weeks old he was transferred by ambulance to the local Children's Hospital NICU.  I was very nervous about the transition.  One of his nurses assured me that she would ride with him to the new NICU.  I could not be there because my youngest daughter had the flu.  The transfer went well and as soon as Noah was settled the new NICU nurse called me.  I had to content myself with phone calls for the first week he was in the NICU because I became sick with the flu.  Once I was finally able to visit him, I was impressed with Children's NICU.  Every time we came to visit, a nurse would come over to us and explain everything they had done and what tests they were going to do that day.   Once we knew Noah was going to get a trach, they made him a special personalized trach box to hold his trach supplies.  One day I came in and found him dressed in a cute Halloween onesie.  A nurse had bought him several Halloween onesies and dressed him.  They brought us a rocking chair so we could sit and rock. I spent many a day just sitting in the NICU surrounded by beeping machines and quiet babies.  One by one I watched babies come and go.  Some had a short stay, some had longer.  I saw parents crying, nurses talking in hushed tones and babies who didn't move.  Once, the NICU was closed for hours.  I sat in the lobby waiting to go in to see Noah but they never opened it back up until that night.  I felt sad and frustrated because I couldn't see my baby but I felt extreme sadness for the parents of the baby who had shut down the NICU.  Another time I encountered a mom crying in the hallway. She was on the phone with someone explaining that they were having to make the decision to whether to turn off the machines or not.  It was heartbreaking and in the back of my mind I wondered if one day I would have to make that same decision.

The day we were released from the NICU was both scary and exhilarating at the same time.  The NICU nurses had become our lifeline and they were so supportive and caring.  I wanted to take all of them downstairs to the 5th floor with us.  I will never forget them packing up his stuff in a small box, unhooking the equipment to put on a battery and then wheeling him to the elevator.  A new chapter of our life had begun. 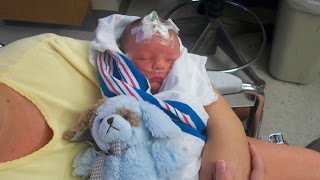 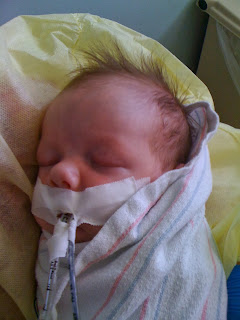 Posted by Melinda at 9:02 AM No comments: