During the month of June, Noah was admitted to the hospital to change over from the LTV 950 ventilator to the trilogy ventilator.  This is our experience with the changeover.


On June 29, 2015 Noah was admitted to the hospital to receive a new ventilator.  During this time, he also received his annual sleep study, his annual holtor monitoring and his annual neuroblastoma check.  This was a very interesting hospitalization because he was not sick.  During the day, he was allowed to roam the hospital and the nurses only checked in with us a few times since this was not the usual hospitalization.   Ventilator training was extremely easy since we already knew how to work a ventilator (a more complicated ventilator).  Going from the LTV to the Trilogy was an extremely easy transition.  I realized very quickly that the Trilogy is an easier machine to work and also easier to transport places. 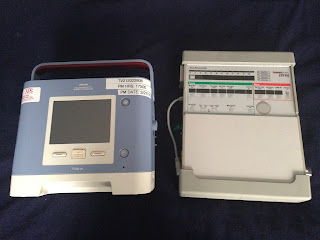 Here is a picture for comparison.  The Trilogy is on the left and the LTV 950 is on the right.  The Trilogy is much lighter.  It has a handle at the top for easy transport.  It is all digital.  There are 4 buttons on the front.  One is the power button, one is the silence alarm button and the other 3 are used to access the menu.  There is the menu button in the middle and an up and down button on either side that is used to scroll through the menu.  The LTV has many more buttons and menus that are hidden and hard to find. With the Trilogy, you just scroll through the options, hit select, make whatever changes are needed and then hit the ok button to accept the changes.  It's extremely easy to work and change the settings. 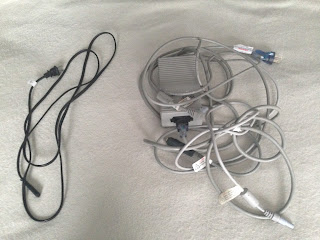 Here is a comparison of the power cords.  The Trilogy is on the left and the LTV is on the right.  The LTV power cord was very heavy and bulky.  The Trilogy cord is just the same as a laptop computer cord and it can be bought at any computer store. 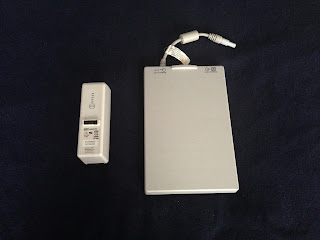 Here is the battery comparison.  Trilogy is on the left and LTV is on the right.  The Trilogy battery stays in the back of the ventilator so it is always charged.  The LTV battery is a lot bigger and heavier and needs its own power cord to charge.
﻿ 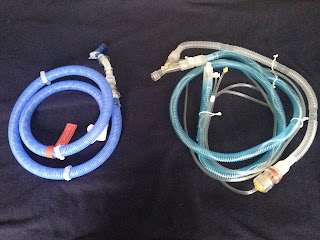 The circuits are different as well.  Trilogy is on the left and LTV is on the right.  The Trilogy has one tube in the circuit while the LTV has 2, one of which is the PEEP valve.  The PEEP is built in on the Trilogy.  When setting up the circuits on the LTV, we always had to do a leak test.  There is no leak test with the Trilogy.
As you can plainly see, the Trilogy is lighter, easier to use, and more easily portable.  We were able to eliminate a huge power cord, a ventilator stand (the Trilogy is flat and doesn't  need a stand), extra batteries, cords for the extra batteries and a long bulky circuit.  Another huge plus is that there are no unnecessary disc sense alarms.  Before with the LTV, the circuit had to be placed a certain way.  If it were turned upside down, then it would collect water and alarm.  This does not happen with the Trilogy.  There is also no autocycling.  Over the course of the night, water would collect in the LTV circuit, causing Noah to breathe very fast and pulselike.  We would have to get up several times a night and drain the water.  This does not happen with the Trilogy.  We have less vent alarms overall.  The only major issue was that Noah had a pretty big leak around his trach.  We compensated for this with the LTV by turning off the low min volume alarm.  However, we can't do that with the Trilogy because this is the main alarm.  Instead, we upsized his trach from a 3.5 to a 4 and we lowered the alarm rate.  This helped tremendously.  He is still able to talk well with the larger trach.
The sleep study at the hospital was very awkward. This was done in his room.  The sleep technician sat beside his bed the whole night.  Neither I nor Noah got much sleep.  She sat there with her little light and her computer.  We heard her typing, shuffling papers, moving around in her chair, and her cell phone vibrating.  In addition to this, there were people in and out of the room all night.  The next day, the RT informed us that the sleep study wasn't "great".  I told him of course it wasn't because we did not get any sleep.  Noah is not use to having someone sit beside his bed all night.  I'm so glad we never had nursing because this would have driven us nuts night after night.  Regardless, they were able to get some numbers.  We increased his breath rate a little but he basically has the same settings that he did with the LTV.
After one night in the hospital, Noah was released.  The first night at home was interesting.  I was so accustomed to the louder noise of the LTV.  The Trilogy is much quieter.  It took a few nights to adjust to the quiet.  He alarmed quite a bit so I adjusted the alarms.  The next night was much better.
Overall, the changeover from the Trilogy to the LTV was one of the best changes we have made.  The only negatives that I see are that the Trilogy goes through a lot more water.  We would go 3 days using one water bag with the LTV.  Now, we pretty much go through a bag of water a day.  Also, the Trilogy has a whisper valve that the LTV does not have.  The valve is near his chest.  I find that he covers it up with blankets or his bear, causing it to alarm.  I think it would work better if the valve was located towards the bottom of the circuit, similar to where the PEEP valve was on the LTV.  As I stated above, the quietness of the Trilogy was also a small negative but we have adjusted to it now.
I highly recommend the Trilogy over the LTV.  It is more portable, easier to use and much quieter.  Our next step is to transition from the trach to a mask.  This transition will probably take a lot longer or even not at all.  Noah hates masks on his face.  I firmly believe it's because of the "smelly masks" they use for the bronchoscopies.  He doesn't even like Halloween masks on his face.  We are not going to push the issue.  As long as he is happy with his trach then that's what he will use.  We definitely want him to have some control over his care.  Maybe one day, there will even be a smaller, better ventilator than the Trilogy.
Bye Bye LTV.  Thanks for keeping him alive for 5 years. 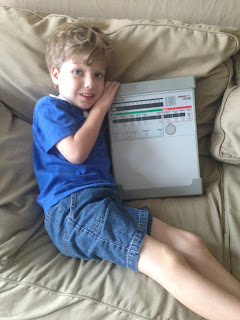 Email ThisBlogThis!Share to TwitterShare to FacebookShare to Pinterest
Labels: Trilogy