We have gone through many changes over the years.  This year, our big change is Noah going to a new school.  (I will post more on this later).  In the past few years, the biggest medical changes were a new vent, a new pediatrician,  and a new DME company.  A few years ago, one of the doctors who diagnosed him left for Seattle.  We were not happy but we still had our other two doctors and things were fine.  Last year, the head of Pulmonary, the doctor who helped diagnose Noah, the doctor who comforted me while giving the diagnosis, the doctor who assured me Noah would be fine, the doctor who got him home before Christmas, the doctor I trusted to keep anesthesia in line and do his bronchs,  LEFT.  Now, we only have one doctor who I completely trust.  Fortunately, we now only do the bronchs every other year so Noah will not have one this year.  This will give us a year to figure out what to do, as I do not trust anesthesia at all.

Another big change is that the trusted RT, who is very good at his job, left the hospital.  He still continues to work with our children's hospital but he's not there every day.  At the last clinic, I was also told that there had been big changes to the DME company.  The two people who ordered Noah's supplies and made sure we had what we needed, left the company.  So now we have all new people at the DME, all new RTs at the hospital and we are left with only one doctor with CCHS knowledge.  My anxiety is high.

This week, Noah had his annual sleep study, where they check his ventilator settings.  Usually, we would do the study, stay in the morning until the doctor (the doctor who left!) came around and made ventilator changes if needed. Now, a doctor doesn't come around.  We leave, wait for the study to be read and they call us with any changes.

I got the call yesterday.  An unknown (to us) pulmonary doctor read the results and wants to change Noah's settings from 20 to 14.  (a 6 point jump).  Is this doctor familiar with CCHS?  I have no idea.  Most of the doctors I have found try to lump him in with normal ventilator patients like kids with CF or SMA.  Regardless, I'm questioning such a large change.

The other issue is that I question the validity of our CO2 monitor.  These monitors are very rare with home use.  Most DMEs have not had any experience with them.  We were fortunate to get ours upon Noah's discharge, although there was an issue where the doctors were thinking about not releasing him from the hospital until we got the machine.  Thank goodness they let him go because it took several months after discharge to get the machine.   We used it for a year.   Then, Noah became sick.  We kept checking his co2 and the machine kept saying it was high but not dangerously so.  Using my instincts, I took him to the hospital.  They checked his co2 and it was so high they admitted him.  Our co2 machine had failed.  That was the first time I realized we cant fully trust these machines.  I made a call to the DME and they had to scramble around to get us another machine.  We came home, used the machine and all was well.  About a year and a half later, the machine started acting up and I called the DME.  They informed me it should be calibrated but they couldn't do it because they were only suppose to supply the machine, not work on them.  They had no idea what to do.  Eventually, over the course of a year they got someone from the company who makes the machine to come to the house.  He recalibrated it and said it was reading 20 points lower than it was suppose to be reading.  So for over a year, when his co2 said it was at 30, it was really at 50.  (When it hits 50, he is suppose to be on the vent 24/7 until his numbers come down.  See how important this machine is??? Its the second most important piece, with the ventilator being first.  We use the numbers from this machine to adjust his breath rate and pressure rate on the ventilator.  When co2 is high, we bump him up and give him extra ventilation). After I found this out, I was livid.  I informed them this was his life on the line and they needed to step it up.

Not much really changed.  We continued to use the machine, although I didn't fully trust the readings.  I used Noah as a gauge.  I knew if he had a headache, acted more tired than usual and more lethargic, that his co@ could be up.  The manager of the DME was able to get a calibration machine from the manufacturer and he came to the house once more to calibrate it.

Over the course of the next few years, the manager left the DME.  The one person who knew anything about the co2 machine was gone.  We have very few options for DMEs.  Most do not do ventilators.   Some do not take our insurance.  We were stuck.

Flash forward to two years ago.  Shortly after our move to the new house, we received a call from the DME that they were discontinuing our service.  They were no longer going to have ventilators and they were no longer doing pediatric patients.  In fact, they were bought out by another company altogether and were becoming a new company.  They gave us a month to find a new provider and said they were going to come pick the vent up.

Our favorite RT, (the one who left) gave us the contact of our current DME. I called them, they came out with our new ventilator and setup.  Miraculously, they were much better than our old DME.  We were able to get a second ventilator, a better pulse ox and supplies were always on time.  Most times, the supplies were correct but if they weren't, they sent what we needed the next day.  Things were not backordered anymore and we were able to get saline bullets for the first time in years.

As for the co2 monitor, they informed us that we owned the one we had so we should just keep it and use it.  I mentioned it at vent clinic every time we went but nothing was ever done.

Flash forward to present day.  With the breath rate being so low, I need to be able to make sure his co2 doesn't climb too high.  Our favorite RT now works for our DME company.  This part is good.  The bad part is that when he called me yesterday about the monitor he informed me that he had moved to Gulf Shores.  So now, two of our 3 doctors and our RT who knows about CCHS are gone.
As for the co2 monitor, he ordered new ones.   He informed me that the downside is that even he does not know how to use them.  They are suppose to be mailing us one and we will have to figure out how to use it.  He informed me that the supplies that go with this machine (tubing, water traps, etc) should be sent every month with supplies.  This does not give me much comfort in the fact that they don't know how to use the machine and now he's 5 hours away and can't come help us.  He did tell me to call if I needed, which I most definitely will.

So, I am left with a doctor I don't know making changes to  Noah's settings and a new machine that nobody knows how to work.  I am strong and I will figure this out.  It's so frustrating though.  Just once I would like for everything fall into place and have no complications.  It's beyond exhausting to deal with these machines, keep Noah alive, try to live as normal a life as possible, deal with a medical community that doesn't understand and watch trusted doctors and RTs leave.

Such is the life of a rare disease.  I will update about the co2 machine once we receive it. 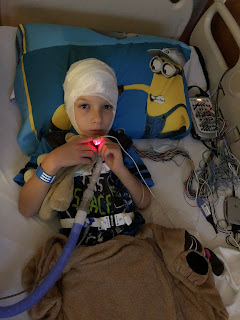